Once you have got some time & space to be creative, now it is time to use some tools to make the process easier. Even though there are many online tools (and explanations) to help you, they can also lead to distraction. So I’ve found the quickest way is pencil & paper as it does not interrupt my flow. Digital tools are great when creating the finished form and should be saved for later in the process.

This is something that seems to have disappeared from most game systems over the years, and I can see why with the shift in focus towards narrative storytelling in RPGs. However, they can act as a prompt to help build the encounter or session.

For example, in one session of AD&D (I’m showing my age here). One of the encounters our party had was during the night once the campsite was set up and the watches allocated. A terrified hedgehog races through followed a few seconds later by a giant bear limping after it. We’d grabbed our weapons expecting violence but took a step back to let the bear go on its way, as it was too worked up to help. After the session, the GM said she rolled up the two creatures and mashed them together into a single non-combat encounter.

This shows how random encounter tables and for that matter, any table can be used to spawn ideas. It also demonstrates that not all encounters need to end in violence.

Flowcharts are closely related to Mindmaps in look and simply add a direction of flow from concept to concept. The ones used in programming have a set of symbols to describe the flow of control in a program but in the case of RPGs it could show the direction of flow for a plot. The main difference is the arrows that are used to visually show the connection.

Usually built around a single question, phrase, or idea brainstorming is just throwing as many variations down as possible.

Is a free association technique where you throw random words together to see what happens. A great example of this is on the Runehqmmer channel.

In it’s simplest form a Mindmap links together ideas.  I tend to think of it as labels & links. The labels are the word, concept or idea that represents a thing such as an NPC, room, or event. While the link is how the labels are connected, which could be a relationship between NPCs, connecting corridors between rooms, or possible repercussions from events.

For example, In the review of Oath of the Frozen King, there is this picture. 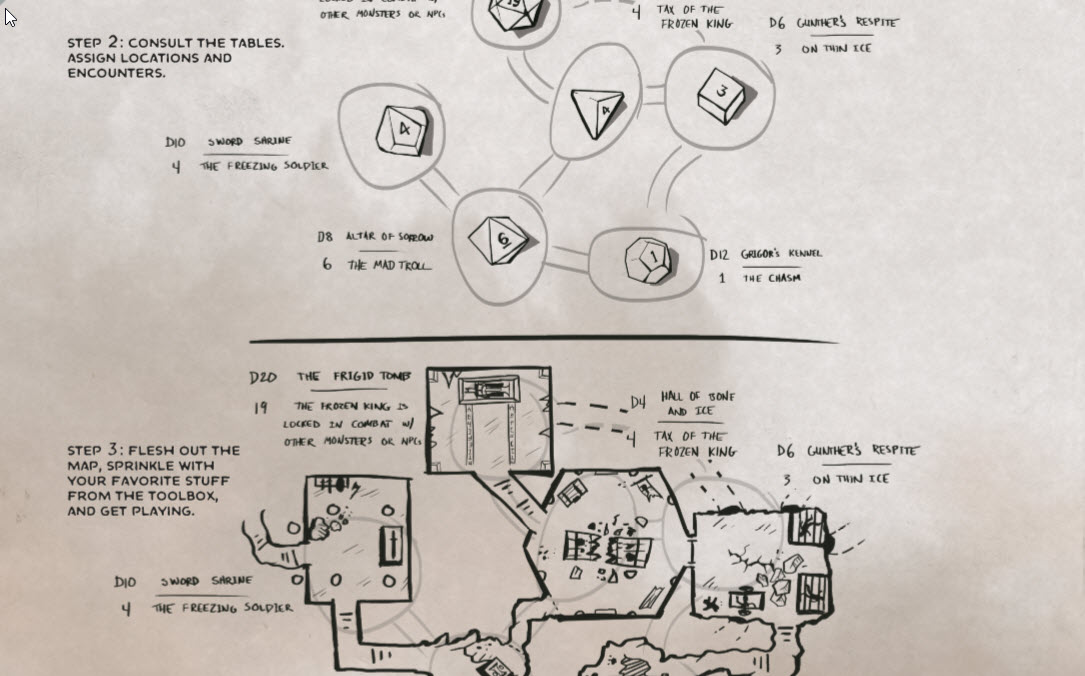 It shows a collection of dice linked together by lines and when developed it becomes a series of rooms or dungeon.

Each of these techniques is a starting point for the GM to develop their ideas from and requires a little time to polish them up into an encounter, plot point, or some other part of the game.

One of the choices a Player Character can have in Cyberpunk 2020 is to sell out. Basically, it’s more chrome for young punks at the cost for servitude to the Corporation, Covert Military, or Organised Crime. New players can access these easy packages of cyberware. Providing them with Cyber-Soldier, Netrunner, Tech Support, Faceman, and a Bioware focused pack.

Pages 93 & 94 cover the details of selling out and as a GM it does provide many opportunities to make the character’s lives more difficult. An organization’s coercion technique is hidden in the GM’s notes adds some paranoia to the game.

An example of a corporate’s holdover a character is Case from Necromancer. Having been locked out of the net by his past, Armitage offers a treatment to give him what he wants. As always, life is not that simple as the treatment is temporary, requiring Armitage’s cure.

Having a character selling out leads to some interesting adventure hooks.